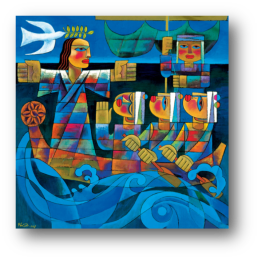 Job 38:1-11 (The Message) 1And now, finally, God answered Job from the eye of a violent storm. He said: 2-11 “Why do you confuse the issue? Why do you talk without knowing what you’re talking about? Pull yourself together, Job! Up on your feet! Stand tall! I have some questions for you, and I want some straight answers.
Where were you when I created the earth? Tell me, since you know so much!
Who decided on its size? Certainly you’ll know that! Who came up with the blueprints and measurements? How was its foundation poured, and who set the cornerstone, While the morning stars sang in chorus and all the angels shouted praise? And who took charge of the ocean when it gushed forth like a baby from the womb? That was me! I wrapped it in soft clouds, and tucked it in safely at night. Then I made a playpen for it, a strong playpen so it couldn’t run loose,
And said, ‘Stay here, this is your place. Your wild tantrums are confined to this place.

’Mark 4:35-41 (NRSV) 35 On that day, when evening had come, he said to them, “Let us go across to the other side.” 36 And leaving the crowd behind, they took him with them in the boat, just as he was. Other boats were with him. 37 A great windstorm arose, and the waves beat into the boat, so that the boat was already being swamped. 38 But he was in the stern, asleep on the cushion; and they woke him up and said to him, “Teacher, do you not care that we are perishing?” 39 He woke up and rebuked the wind, and said to the sea, “Peace! Be still!” Then the wind ceased, and there was a dead calm. 40 He said to them, “Why are you afraid? Have you still no faith?” 41 And they were filled with great awe and said to one another, “Who then is this, that even the wind and the sea obey him?”